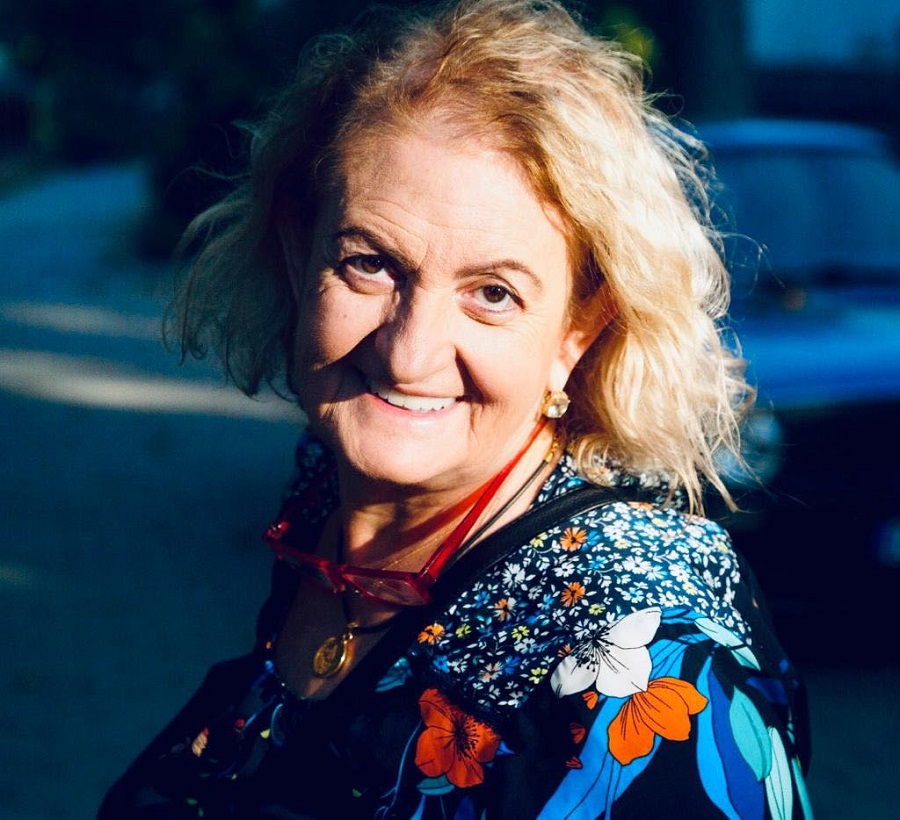 When I came to Kosova from NYC I thought I will have nothing to do, I will rest and probably nothing is going on since the pandemic has affected everyone globally. One should never make assumptions on anything.

Upon my arrival I was introduced to Zana Hoxha the Director  of Art Polis organization that uses art and activism as a tool to raise awareness on gender issues, women’s empowerment, social, political, economic, and cultural conditions in the development of Kosova; breaking taboos of patriarchy and questioning how long women must be discriminated, violated, oppressed, and secluded. This is right on my path I thought and got very excited to learn that ART POLIS 9th edition of FEMART International festival was upcoming starting 1-6th October. There couldn’t be a better platform than this for me to express myself and share my experience.

F…Sexism was created to spread the good news that women are no longer dormant, they make over 51% of global population. They are daughters, sisters, mothers, wives, friends, leaders, artists, professionals and more. FEMART portrayed an excellent collection of works produced by women who are trying to raise awareness by standing tall, raising their voices, and saying no to injustice, no to violence, no to wars, no to destruction and thus this will be the end of sexism.

FEMART’s vision is to promote justice and inclusiveness, to respect and be respected, to create a platform where all groups will be included and be heard, to celebrate success with society and create opportunities for young people to share their talents across borders representing Kosova at their best.

I couldn’t even imagine what FEMART would be like because I never had such an experience before. The Opening on the day 1 started at the national theater in Prishtina with a fashion show by Yllka Brada, new rising Kosovar designer star with her new selections “Fall 2021…Sexism”. Followed by amazing singer Ceylan Taci, a global citizen with Albanian roots like myself. Her presentation through songs “Return to Roots” touched me deeply because it brought out the same tendency of connecting to roots and reinventing my identity. She was followed by Alzan Gashi piano, Arber Salihu Guitar and Drin Tashi drums. She transported us to a journey of the unknown in search of love and belonging until we reach home. She brought tears to my eyes, and I wonder do we ever arrive home on time?

My workshop “Feminism, Modernism and Change” took place on the second day of the festival at Oda theater. 20 young girls ages 16-20 attended the workshop. We talked about everything, what is feminism, what is modernism and what change they desired. The workshop was conducted in English, we had one attendant from Germany, but everyone spoke English fluently. I was so impressed. With positive thinking views, we aimed to strengthen self-confidence, enable girls to protect themselves with non-violence techniques, and learn to believe that life has a lot to offer to them. They could do it if they believed they can.

We connected, cried, laughed, and talked about their dreams. The girls were thirsty for such a workshop where they openly expressed themselves and told their stories without any hindrance. I just loved them.

All the events were livestreamed, and I couldn’t attend every event. But those I attended are those that left the most impression on me and I can’t stop thinking about. The art exhibit titled “BREATHE “ in collaboration with artists from Kosova and USA, took  place at the Gallery of Arts at the University of Arts, curated by Berat Bajrami; showing the impact of Covid-19 globally.

Followed by a play “Birthday” at the theater Dodona, featuring Igballe Qena, Rebeka Qena, Bislim Muçaj, Labinot Raci, Alketa Sylaj, Sheqerie Buqaj, and Florenta Bajraktari, acting superbly on issues of dementia, and disability. Their excellence left the audience breathless waiting for positive solutions where there were none.

On Day 3, Zana Hoxha and Robert Nuha talked livestream on how pandemic effected every life. How it impacted creativity and questioned how to overcome limitations without being totally affected. This way Art Polis and its staff worked though the pandemic and kept their minds positive. The outcome was FEMART Festival.

The showing of films at the Armata theater “NEO & DOKU FILMS” from Kosova were trully an inspiration. Those short films created by film students and sponsored by Dokufest, were touching on issues of discrimination, poverty, immobility, and impossible dreams. These young people inspired me because I saw a new generation of talent rising in Kosova and one day soon they will be representing our stories worldwide.

Documentary film “No one Needs Her” from Serbia, directed and written by Maja Mitić, assisted by Dzeneta Agović, narrated by Olivera Viktorović, and actors Maja Mitić, Dragana Jovanović, and Alexandra Pavlović created a very powerful impact with their story of Muslim women being trafficked to Syria while government  of Serbia remains silent. Watching this film about the destinies of young women who were trafficked and feeling the pain of their families not knowing which camp their daughters are being kept by ISIS, is chilling.

Among other outstanding performances were Blerta Basholli’s Film Hive with Yllka Gashi, Çun Lajçi and Kumrije Hoxha and many others, portraying the story of Fahrije Hoti from Krusha, who after her husband was missing during the war among all other men from Krusha who never returned, she had  the courage to teach woman to use their best skills in cooking and start earning their bread and butter. The film brought me right back in Krusha after the war where I was present with Kosova activists from “Motrat Qiriazi” Kosova, trying to motivate these women to try to survive for the sake of their children. Yllka Gashi did an outstanding performance and the public at the theater were breathless, a pin drop could be heard.

On the day 4 for the first time FEMART appears at the Assembly Hall of the Republic of Kosovo with a report on Sexism conducted by Ariana Qosaj. Many ambassadors were present: Tomas Szunyog, Chief of Party of European Commission, and special envoy to Kosovo; Her Excellency Ambassador of France Marie-Christine BUTEL; His Excellency Ambassador of Austria Mr. Weldinger; and many important leaders. Sexism and steps to address it while seeking support and methods for change were very successful. Three panels took place during the day: “The Institutional Reaction of the Local & Central Government towards Sexism” 2nd panel “Women in Politics and Sexism in Politics,” also touched upon some very difficult issues on women and governing. 3rd panel “Sexism in Culture and Media” opened some deep-rooted traditions regarding women and was quite disheartening to learn that there is such a long road ahead, but since a journey of thousand miles beings with the first step, there is hope.

The mural “The double Headed Eagle” by the Ermira Murati- The Orange girl painted in one of the city’s walls it was astounding. She  turned to opposite heads of the eagle, the Symbol of Albanians to kiss each other rather looking at opposite directions. This indicated that peace will only come through love and not through conflict.

The evening of day 4 concluded with the commemoration of four brilliant performers: Nexhmije Pagarusha, Leze Qena, Shahindere Berjalolli, and Violeta Rexhepagiq. Four gifted voices of freedom, beauty, dedication, and contribution to the people of Kosova and the Ballkans. Tireless, and forever giving these four women brought art to a state of excellence serving as a role model for all women. Their voices are still echoing in our hearts.

The day 5 brought the magnitude of performance of Maja Mitic “Sea Women”alsoportrayingthe conflict of an actor between role and reality, the transformation, the denials, the challenges, and inability to be yourself after having embraced so many roles in one body. The personal then becomes public and the public becomes personal. Maja Mitic presented a superb performance unlike anything I have ever seen.

Maja Mitic and Branislava Jovanovic also conducted a workshop what is sexism and how to recognize it in everyday life. Incredible, so many young people where very interested to learn about the ways sexism sneaks in the everyday life and which tools are effective to dismantle it.

Day five ended with the promotion of the book as a tool how to destroy patriarchy, among presenters were Ilire Zajmi, Rita Petro and Shqipe Malushi. The poems were read by actors Safete Rogova, Rina Krasniqi, Zhaneta Xhemajli and facilitated by Flora Durmishi. The theater was full, and public was deeply involved in the reading of poetry.

The closing of the festival came unexpectedly with sad news after losing our dear beloved colleague photographer Meddy Huduti who passed away tragically on the morning of the closing night of the “ French Cabaret” Performance. The hearts of the artists, Art Polis Staff, volunteers, and participants were broken. I didn’t know if the closing night would happen. However, in spirit of love, everyone pulled themselves together and the closing night was extraordinary. I have seen many “Cabaret” performances in New York and Paris, and I did not know what to expect. To my surprise the “Cabaret” performance that night in Prishtina was equal and beyond those amazing professional performances I had seen. They were dancing on the wings of love and sorrow. The voice of Zana Berisha echoed beyond the theater roof trying to reach the soul of Meddy in heaven. It was a cry of longing and loss of the beloved artist, a brother, a friend. The Director Zana Hoxha projected Meddy’s Photo on the back wall, bidding him farewell as he deserved to go honored as an artist, everyone rose to their feet including the public for one minute silence. FEMART festival ended that evening with pain and pleasure, with unity and separation, with success and loss.

After the performance it was the time to cry. Artists and Artpolis staff sat down and cried.

I have never seen such a grand event organized in one month both live and online; no one could ever notice if things didn’t work out, but things worked out. And outstanding tireless Art Polis staff led by vibrant, energetic, visionary Zana Hoxha who did not stop for even a moment, gave the audiences an incredible level of hope. Pandemic did not stop her, and she brought people together respecting pandemic rules, and rising through pain and through pleasure. Art and activism became one in service of truth and the people. We didn’t fight sexism; we only have risen above it to show that we have power to overcome. “We are the change!” Zana Hoxha said.

My deepest gratitude for their work goes to Art Polis Staff and Zana Hoxha; to all artists involved, to guests who travelled far and beyond to come and be part of FEMART, to the public and to all online viewers. There has been so much more that was available in FEMART festival, but pages are not enough to describe. For all whom I have left out to remember I apologize.

One thing I learned from this festival is that Kosova is not asleep, it is brewing with artists and art keeping the spirit alive. While it looks like pandemic has dampened the spirit and the mind of the people, watch out, the artists are not sleeping they are alive and performing on many stages and winning over pandemic, economic, political, and social difficulties.

Kudos to you my people for being strong like double headed eagle and moving on. And bravo Zana Hoxha for creating this platform for all to express themselves with love and only this way we can erase sexism and all isms making them disappear like shadows, effortlessly.