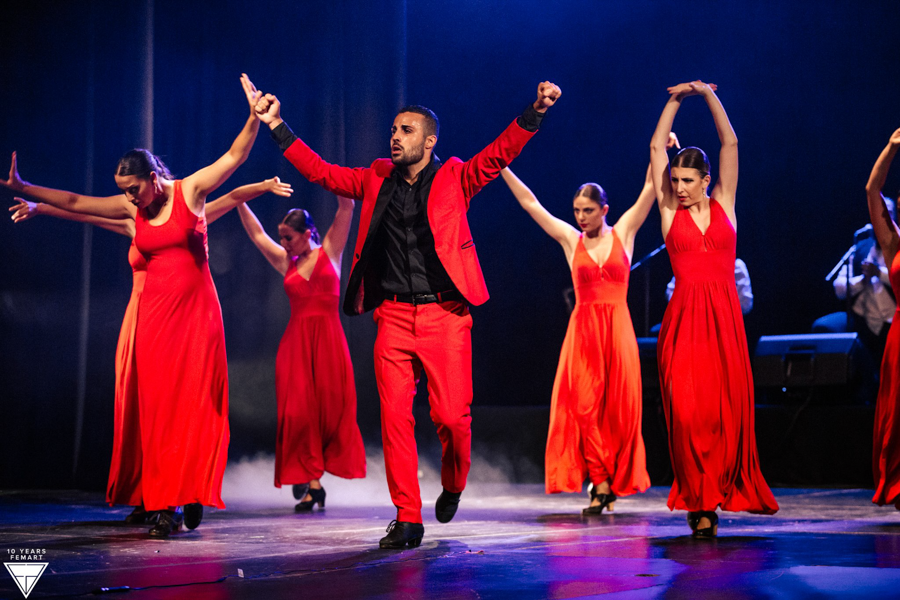 DAY 10 OF FEMART FESTIVAL, A ROLLER-COASTER OF EMOTIONS

The 10th day of FemArt Festival, June 23, 2022, concluded the roller-coaster of emotions in its purest form. Two performances, from the two extremes of human emotions come together in a common point – acknowledgement of life. One was about pain and human suffering and the other was about joy and the celebration of life.

Prishtina prison. It is situated in the center of the city. I walk with organizers and friends, because you cannot find it on Google maps. We enter the building. It is now transformed into a Museum. I mean, it is not transformed at all: everything is there, untouched, real, spooky. There are prisoners in the cells, hitting, pounding, yelling, producing weird voices. I knew they were actors, but they were too convincing. Like some ghosts from past times. The long barren, deteriorated corridors lead to the main court where the play will take place. I look up: tall towers, barbed wire, the sky begins to darken. A woman enters the stage, washes her feet and then gives that water to prisoners to drink. I don’t understand words. I understand movements, the conflict, the torture that they endure. Their pain permeates my spinal cord.

This is a story about political prisoners in Albania and Kosovo; in Albania during Enver Hoxha’s regime and in Kosovo during Milošević’s regime. You didn’t need to understand the words to understand the silence and the wordless scenes of torture and of rape. Some scenes triggered something my people experienced, in a different context and in a different time. In one of these scenes, the guards are distributing cigarettes to the prisoners. And then came some words in Serbian. Those I understand. “We’re not cunts. Here you go,” and cigarettes start falling from the tower. And then the guard said: “Are we ready”? I knew exactly what would happen next.

Ratko Mladić enters Srebrenica, bringing chocolate and sweets. And lies. He makes sure his generosity is filmed while distributing gifts and saying everything is going to be alright. One of the boys from the video survived. Only to find out that moments after this, that same person would direct mass executions of more than 8000 men and boys, one of whom was his father.

Now, back to prison to the end of the scene. While prisoners look for lighters as madmen to enjoy in a cigarette, I am getting ready for the anticipated moment. One last word I know someone will utter. And it came: “PUCAJ”. And they all fell to the ground motionless.

I am at home, preparing to simultaneously interpret the funeral of general Jovan Divjak. It is still pandemics and we are working via Zoom. I received the speeches in advance and I’ve been crying for two days. But now, I will go live and I can’t cry. I have to be strong.

I left the prison deeply shaken. There was a lot to process. I took some time to understand what happened there and what happened in my own past and what is happening in my head. I realized that there is one word that can decide for you on what side of history you will be standing when the dust settles. NE (pucaj). DON’T (shoot).

Flamenco is a dance using a wide spectrum of emotions: from melancholy and sadness to passion, love, and intimacy. It starts with slow rhythm. What did the group “Luxuria” prepare for tonight? It’s been a lot to process in these ten days. A lot of emotions, feelings, encounters, new stories, new friends. It seems that it all echoed in the first melodies we can hear tonight. Some dancers enter the stage. They dance through a couple of movements and then go back. We hear music again. Then another dancer gets out and he starts accelerating. He taps with his shoes, expressively turns his arms, the ambience heats up and the audience starts cheering “ole”. A magnificent solo! The magnificent power of a human body! The magic continues almost until midnight. The dancers in beautiful dresses join the leading dancer on the stage and they repeat several times: It’s not over! It lasted even when it was over, since all the performers – the singers, musicians and dancers enchanted the audience in a capella solos, followed by applause until the very end.

Zana Hoxha, the director of the festival, closed the event thanking the guests from Spain, the audience and inviting every single member of the Artpolis team to acknowledge their work publicly. It was a lot of emotion for ten days of the festival with a very rich program. Zana then called for one minute of silence to mark the sudden passing of a dear friend, artist and very brave woman, Vjosa Berisha that shook all of those who had a chance to know her. This evening everyone rose together and honored her fighting spirit, resistance, love and passion for art. We witnessed the revolutionary power of art, and its power to heal. A never ending evolution!

Ivana Bilić (Sarajevo, BiH) is an intern in Artpolis where she will conduct her research on

the role of performing arts for social change. She is a translator and interpreter in English,

French and Bosnian and a human rights student with special interest in women’s rights,