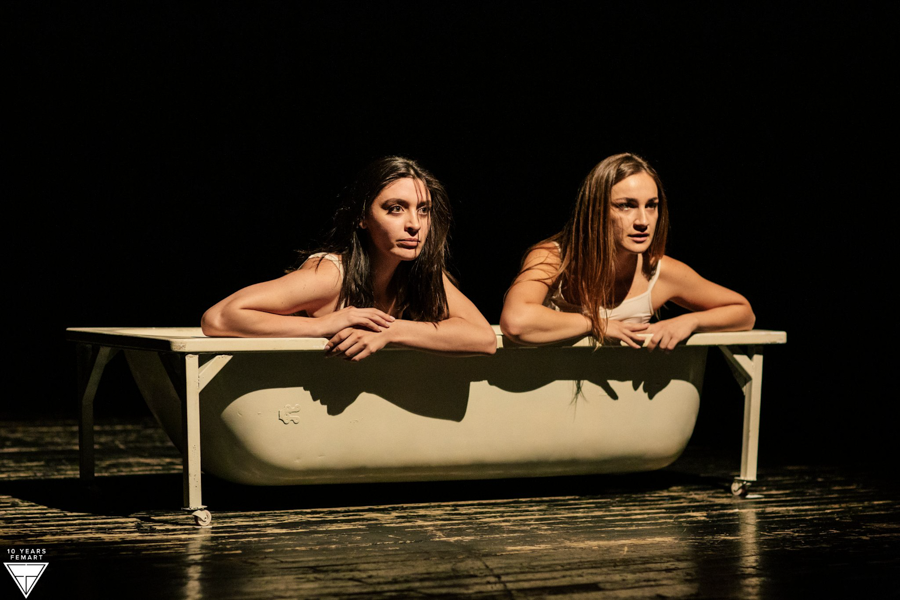 My mother is dead.
“My mother died today. Or maybe yesterday, I don’t know.” This is how Albert Camus starts his novel “The Outsider”. An echo of it we hear in the performance “Voiceless” that took place at the National Theater on 21 June, within the 10th edition of FemArt Festival. The main protagonist’s mother died. She got a message about it. She is supposed to look for a coffin, flowers, think about the words she’ll say and how perfect and dignified she will be at the funeral she needs to organize. Everyone tells her that. Everyone calls to say these stupid things people usually say in such situations. Everyone expects a huge drama or a huge reaction, when sometimes we simply need to process things on our own.

I am nothing like my mother; I am single, I drink black coffee and I masturbate
Cassandra and her subconsciousness play together, reply to each other, discuss expectations the entire world has for a woman. “I am a writer; I am nothing like my mother. My mother was perfect, had perfect dresses, she would know what to do.” She must choose the perfect dress for the funeral. Must write a eulogy. She must buy flowers, choose a coffin. But can’t. But doesn’t want to. Her mother was a doormat and everyone walked over her and she never said a word. But she is not a doormat and she will not let others walk over her.
Two bodies, one woman
When it comes to very minimalist scenography, costumes and scenery, they are enriched by the abundance of movement. Two women portray only one person, one is Kassandra and the other one is Kassandra’s subconsciousness. But the two actresses are in perfect sync: where one ends, starts the other. There were two bodies on the stage, but we could only see one. It takes a lot of trust to entrust your body to someone. The actresses said they didn’t know each other – one is from Albania and the other from Kosovo – but they fell in love with the text and agreed to work on it together. Vlera Pylla admitted that in the beginning she wasn’t sure whether she would accept the role. But once she read the text, she couldn’t refuse it.

Diellza Bezera, project manager at Artpolis, told us that following the workshops on sexual harassment organized by Artpolis, they realized that women do not really feel safe in streets and their environment. Then they decided to offer free self-defense courses and opened a call for women and girls to participate in free training. Twenty-five girls applied and started their course in the beginning of June.

The trainer, Nuhi Gashi, said that there are four levels, every level can be completed in 2 months: two basic levels and two more advanced. He mentioned some challenges when it comes to working with different girls from the age of 15 to the older ones. They do not all have the same sensibility and preparedness, but he promised to give his best so that he can commit to each one of them separately. His philosophy is whoever comes to his training is not only his student, but his family. He is doing his best to prepare these girls to defend themselves in potentially dangerous situations, to empower them physically, but also mentally. The training is based on cardio and strength training for arms, and on martial arts, especially taekwondo, for legs. The girls seem to enjoy the trainings, as one of them shares her preparedness: “It’s been only a month but we still feel some comradery between us, we look out for each other, we really are connected. We have training three times per week and we have learned some techniques. Even though I am aware that somebody who is a lot bigger can attack me and I might not be able to properly defend myself, I am still equipped with some knowledge and skills and made aware of certain aspects. I feel more prepared.” 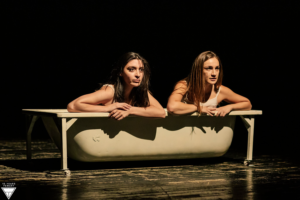 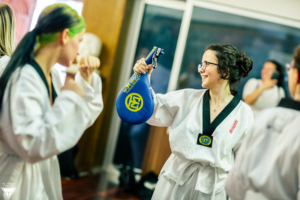 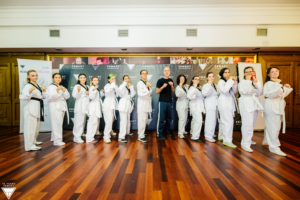 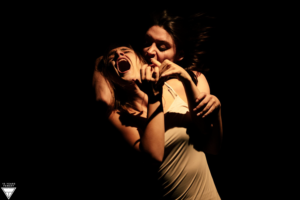