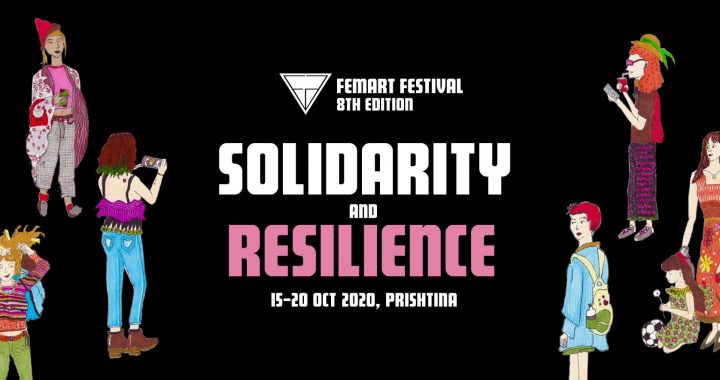 From Thursday until next Tuesday, the eighth edition of the six-day Femart festival will be hosting performances, workshops, podcasts, conferences, and exhibitions by both local and international artists in venues across Prishtina.

This year, boasting an extensive and socially provocative program of 24 events by 165 artists and activists, Femart’s theme of “Solidarity and Resilience” is dedicated to sustaining a collective spirit among women and artists, and their ability to remain resilient amidst trying times.

According to Zana Hoxha Krasniqi, the director and organiser of Femart, this year’s festival was organised with the aim of supporting local artists affected by the restrictions brought on by the coronavirus outbreak, and the lack of public funding to help support their work.

“Besides collaborating with HAPU festival and Etno Fest this year, we created a program that affords more space to local artists while also financially supporting their work,” Hoxha told Prishtina Insight.

The organizers have commissioned six original pieces, including performances, plays, exhibitions, and a report into women’s representation in civil society to be discovered during the festival.

Femart’s events are open to the public for 2-3 euros each and take place at the Oda Theatre, the Gallery of the Faculty of Arts, the National Theatre and Adem Jashari Square in Prishtina. There will also be a series of podcasts live streamed on Femart’s Facebook  site and YouTube channel.

The festival opens its doors at 19:00 on Thursday at the Gallery of the Faculty of Arts with the “Evening Nudes” exhibition, curated by Arta Agani. This will be followed by the official opening concert by the “Zanat” ensemble, which starts at 21:30 at the Oda Theatre.

The second day opens with a presentation of Gresa Rrahmani’s recent report on the “Representation of women in civil society, media, and cultural institutions” at 11:00 at the Oda Theatre, which will bring together panelists to discuss the local and international dimensions of this issue.

Later, Vjollca Krasniqi and Mirishahe Syla will introduce the podcast series, which features readings of Uresa Ahmeti’s writings, by reading “Feminism, Meninism or Humanism?” at 16:00. Each podcast will be streamed live from the Oda Theatre, while visitors can participate in informal discussions after the reading.

Friday concludes with a premiere of the drag performance “Are you a boy or are you a girl!?…” directed by Arlinda Morina at the Oda Theatre at 21:30, which, according to Hoxha, is one of the festival’s artistic highlights. The festival director told Prishtina Insight that the performance is not only the first commissioned drag performance produced and directed by members of Kosovo’s LGBTQ community, but an artistic adventure centering on resilience required throughout the process of coming out.

On Saturday morning at the Gallery of the Faculty of Arts, the Serbian performance artist Zoe Gudovic holds a workshop on the “Teachings of ZED,” which is about women’s dragging and de-dragging experiences. Gudovic’s exhibition “in Army with ZZ” will also be showcased at the gallery at 18:00 on Saturday.

Later on Saturday evening, North Macedonian director Natasha Poplavska will stage her play “Three Sisters & Nights,” starring Ana Stojanovska, Andrew Cook and Miroslav Mitrashinovikj, at 20:00 at the Oda Theatre. The following day, Poplavska will host a workshop, “COVIDA DELL’ARTE”, aimed at professional artists interested in mask-making amidst the shifting usages of masks in theatre and public venues due to COVID-19.

Anna Anderegg’s experimental dance choreography, “Silver Bloom,” which is part of Femart’s collaboration with the HAPU festival, will also be performed on Sunday at the Adem Jashari Square at 16:00, followed by a discussion at the Oda Theatre at 18:00.

True to tradition, Artpolis Production will again premiere an exclusive play for Femart this year. “You, It’s Me,” directed by Natyre Kallaba and starring Tringa Hasani, Florieta Bajraktari, and Fitore Jashari will begin at 20:00 on Sunday in the small hall of the National Theatre of Kosovo.

On Monday, Femart will host a movie night featuring panel discussions with Kosovo women directors, including More Raca and Blerta Zeqiri at 17:00 at Kino Armata. Meanwhile, the final day balances critical debate with performance, starting with the final podcast: Ahmeti’s, “Spring Doesn’t Bloom with one Flower; Crawling Forward and United,” being read by Luljeta Aliu and Liza Gashi at the Oda Theatre at noon.

In the final panel discussion, moderator Shpetim Selmani discusses the co-authored brochure “Artivism – Art and Solidarity in Times of A Pandemic” with panelists Eliza Hoxha, Valdete Idrizi, Shqipe Gashi, and Rajmonda Ahmetaj at 15:00 at the Oda Theatre.

Finally, Zana Hoxha’s adaptation of Frank Wedekind’s musical “Spring Awakening” will be staged at 20:00 at the National Theatre, while the six day “artivist” journey ends with live music by Semira Latifi, Arber Salihu, Alzan Gashi, and Drin Tashi at the Femart After Party at 22:00 at the Oda Theatre.